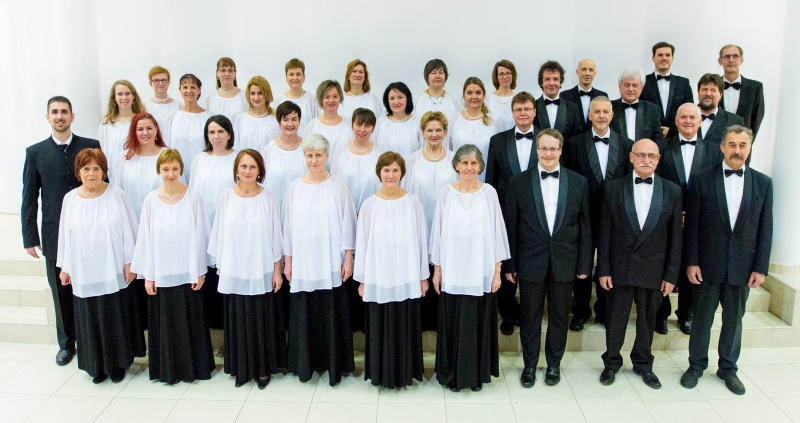 Our ensemble, the mixed choir Fidelissima, was founded on 3 October 1994 by some music enthusiasts in Sopron, a small West Hungarian town with great cultural heritage. We are lucky to have members of various ages and occupations in our choir. To maintain our organization we are able to use a couple of sources: apart from the contributions of our members, we received valuable practical support from the local authorities.
Gábor PALOTAI, the Founder-Secretary of the choir, and János ARANY, the Founder-Conductor, were active till their retirement in December 2014. Both of them received the Medallion ‘For Sopron’ on 14 December, 2014 at the “Loyalty Day” award ceremony in recognition of their cultural work for the town. The choir was also awarded the Prize “Civitas Fidelissima” by the City Assembly. Earning such acknowledgements from our hometown makes us feel extremely proud and honored.
Despite the great loss the leaving of these two key leaders meant for us, the members decided that they want to continue singing, which was encouraged by the leavers as well. At the first rehearsal in 2015, Andrea CZIPSZER became Acting Conductor on the basis of the unanimous decision of the members. The team organizing the daily life and operations of the choir is led by Eszter TAKÁCS, to this day.
Andrea CZIPSZER saved the choir from disintegration with her incredible humanity, kindness and patience. She made all of this in a very difficult and thankless period when the choir had not yet overcome the loss, and it was not able to adapt to the changed circumstances. Despite the obstacles, she managed to prepare us for a concert in collaboration with other local musicians and for an independent concert as well. Unfortunately, her growing personal workload made it increasingly tiring for her to lead the ensemble, so we started to look for a new conductor.
So we found Miklós SZILÁGYI, who was recommended to us by our Founding Conductor, János ARANY. We were looking forward to the first meeting, when the handover of the leadership was treated with great intelligence for the satisfaction of all members. For that we cannot be thankful enough to both of them.
Miklós SZILÁGYI became our new conductor, blessed with a lively temper and gentle humor, which immediately impressed us. We are excited to see where he takes us with this dynamic and youthful attitude!

Our group has become a dominant participant in our hometown’s musical life during the years. The choir performs annually a Season Finale concert as part of the “Festival Weeks of Sopron” program. Every year since 1996, we co-operate in Sopron’s festival program of the “Hungarian Culture Day”. Our goal is to maintain and develop a cultural life worthy of the glorious past. Our repertoire aims also to reflect that, and presents the work of the great Hungarian composers (Liszt, Béla Bartók, Zoltán Kodály, Lajos Bárdos), along with the newer Hungarian works. At the time the choir was founded, the Kossuth Prize-winning composer Sándor Szokolay moved to the town, which meant friendship and a series of collaboration for the choir. Seven of his choral pieces were premiered by Fidelissima.
Many of our concerts are designated to famous pieces of the European choir music too. The ‘a cappella’ (unaccompanied by instruments) programs are from time to time complemented with oratorio, orchestral pieces or pieces accompanied by the organ (Bach’s Johannes-Passion, Duruflé’s Requiem, Fauré’s Requiem, Haydn’s Harmoniemesse; Liszt’s Missa Choralis, Via Crucis; Ramirez: Missa Criolla, Vivaldi’s Gloria, etc.).
In addition to the promotion of the Hungarian choral literature, we strive to familiarize the city’s music-loving audience with other nations’ choir music and musical traditions as well. Therefore, we contact foreign choirs, invite them to meet and collaborate and are pleased to return international invitations as well. Since 1996, we have visited many exciting countries and cities: we were on the road several times in the neighbouring Austria (Mödling, Oberpullendorf, Salzburg, Vienna, Wiener Neudorf), Italy (Bolzano, Cortina d’Ampezzo, Perugia, Roma, Valdagno), Germany (Bremen, Birnau, Engen, Kempten, Neudrossenfeld, Radolfzell, Singen, Villingen), Switzerland (Ennetbühl, Rorschach, Zurich); had a concert tour in Poland (Gdansk, Sopot), Denmark (Aarhus), the United States of America (Flagstaff, Los Angeles, Phoenix, Prescott, Tucson), France (Paris), Finland (Sejnäjoki) and Serbia (Subotica).
Fidelissima participated twice in the Certification Concerts of the Hungarian Council of Choirs and Orchestras (KÓTA): in 1996 was awarded the degree “Concert Choir Cum Laude”, and in 2003 the degree “Concert Choir Summa Cum Laude”.
The ensemble released several CDs. A standalone studio-selection (1998) and a Johannes-Passion recording (2004) are worth highlighting, in addition to many live concert recordings (Duruflé: Requiem; Kersch: Missa Sancti Stephani – 2003; Liszt: Missa choralis – 2006; Duruflé: Requiem – 2014).